The area, after being colonized by British settlers, was occupied in about 1850, when it was a considerable distance from the city of Toronto. It was incorporated as a village in 1888 when there were about 800 people living in the area. The area began to grow rapidly and in 1903 it was elevated from a village to a town. The southern part of the community by the lake became one of Toronto’s most popular travel destinations, and became home to hotels and amusement parks. The northern section, by contrast, was an industrial centre, home to the Grand Trunk Railway‘s main yards.[1] These facilities stretched along most of Gerrard Street, and employed several hundred workers.

When East Toronto was annexed to city of Toronto in 1908 it had a population of about 5,000 people.[3] The CN freight yards closed down in that same year of 1908 and relocated to Belleville and Etobicoke, a move that forced the area into a transition from a railway-based small town into a commuter-based neighbourhood within a city. The trunk yards themselves were essentially abandoned for over 90 years until a housing development was built on most of the land they once occupied[1]

It covered much of the present day neighbourhood of the Upper Beaches, stretching up to Danforth Avenue in the north, part of it stretching to Lake Ontario in the south a portion of the present-day neighbourhood, The Beaches. The central street in East Toronto was Main Street, running between Danforth Avenue to Kingston Road. The commercial center of the town was located at the intersection of Main Street and Lake View Avenue (present-day Gerrard Street).[1][2] Following the annexation of East Toronto into Old Toronto, Main Street retained its name despite Toronto’s conceptual Main Street being historically designated to be Yonge Street. 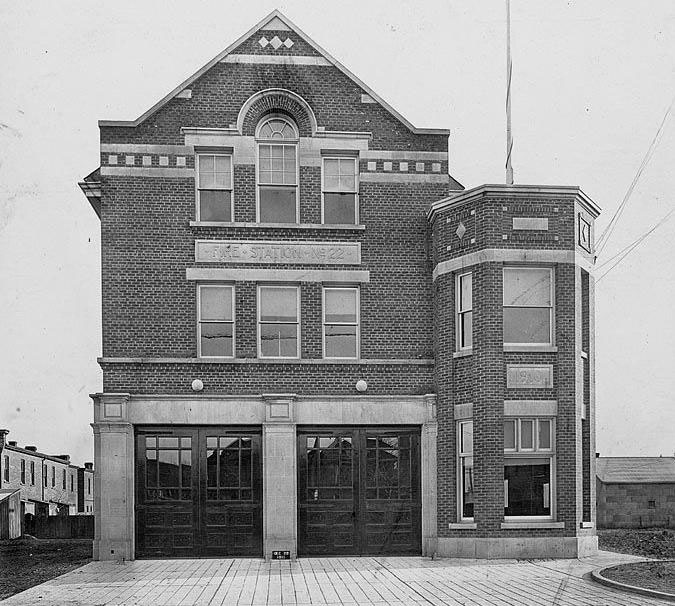 The area featured a farmer’s market and a mix of smaller townhouses and nicer homes. At the corner of Enderby Road and Gerrard Street is a house that used to be owned by a man named Donald George Stephenson. He was a lumber merchant with a physically imposing appearance who was also the mayor of East Toronto. He was well known for his overspending ways, and in 1894 he built a series of row houses on Norwood Terrace, but ended up accumulating major debts and in the end he pulled a disappearing act to escape his creditors.
Behind Norwood Terrace today is the Main Street Bridge which used to be a wooden trestle bridge during the 1920s, spanning eight railway tracks. The area around Main Street was a thriving commercial hub with its own farmer’s market, diverse retail stores and several theatres. One of these theatres was the Ideal Theatre which today is a local retail store. The YMCA used to be on the other side of the intersection where the Ted Reeve Arena is today. Several banks were located at the Main and Gerrard intersection. A hospital and a library were nearby. This was the real centre of East Toronto.
Main Street used to be called Dawes Road in this area. Following Benlamond Avenue into an old established neighbourhood that used to be blocked to the public by a gate.  The business owner duo of Benjamin Morton and James Lamond Smith were both bankers with the Bank of Upper Canada. They were major landowners in this area. Swanwick Avenue, a local street, was named after Mary Swanwick Morton. Together these two business men created the first golf course in Toronto in 1871 near Woodbine and Coxwell Avenues, just north of the St. John Norway Cemetery. On Glen Oak Drive near Norwood Park there are several large stately homes dating back to the 1940s and 1950s. There is no through traffic in this area, and this little nook is virtually unknown to most Torontonians. The house of Edward Lyall Morton, Benjamin Morton’s son, is in this neighbourhood, and some of the nicest houses are located on small side streets at the edge of an escarpment with a beautiful view over the Beach and Lake Ontario.