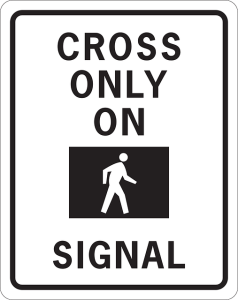 I am aware that a traffic study had been ordered for the crosswalk at Scarborough and Dengate on Gerrard St.

I don’t know whether this study has been carried out as yet. If not I would like to see the study include how it’s results will impact traffic at the intersection of Osborne/Ted Reeve Dr and Gerrard. This traffic light controlled intersection is worth a study of it’s own. It too is a dangerous crossing point for pedestrians regardless of the traffic signal and the crossing guard on duty. During the morning and evening rush, many drivers ignore the fact that traffic ahead of them has backed up to this intersection. They move into the intersection thinking they will somehow make it through before their light turns red. This is rarely the case because of the volume of traffic ahead of them and the pedestrians now trying to cross in front of them. So they are ‘stuck’ there blocking traffic trying to turn onto Gerrard from both side roads. Those stuck in the intersection become panicked to clear the intersection and those on the side roads become angry trying to enter the intersection and everyone begins inching forward trying to ‘beat the light’ again. The whole time there are pedestrians trying to cross over between jostling vehicles and many of these are young students. I have taken photos of this mayhem as has a neighbour of mine. The crossing guard is not effective during this chaos as she can only attend to one side of the intersection. As this is an off-set, wide intersection vehicles turning left from Osborne are somewhat ‘blind’ to the many pedestrians who cross Gerrard from south to north on the west side of the intersection. This is especially dangerous when those vehicles increase their speed coming up Osborne in their attempt to make their green light and then turn the corner at a higher rate of speed. I am currently looking into speed bumps for the north end of Osborne because of the danger this poses to Gerrard St pedestrians and to those living on Osborne.

About the Author: Jason